News
So You Make $100,000? It Still Might Not Be Enough to Buy a Home.
Previous article
An Unusual Economic Indicator on the Courthouse Steps
Next article
Dallas company sells 708 area homes for $210M

DENVER—For Janessa White, the American dream of a red brick house on a tree-lined street blocks from a good elementary school remains obtainable. She just has to rent it.

Ms. White and her boyfriend moved with her 7-year-old son from Missouri to Denver last year. In Missouri, Ms. White owned her home, which she bought for a little over $100,000. To buy a house like the one she rents in Stapleton, an affluent section of the Colorado capital, would cost about four times as much. Even though her household’s income is in the low six-figures, homeownership is daunting in Denver.

“It’s hard not to want to buy,” she said. “Saving for a huge down payment seems almost impossible.”

Ms. White’s household is part of a growing camp: high-earning Americans who are renting instead of buying homes. In 2019, about 19% of U.S. households with six-figure incomes rented their homes, up from about 12% in 2006, according to a Wall Street Journal analysis of Census Bureau data that adjusted the incomes for inflation. The increase equates to about 3.4 million new renters who would have likely been homeowners a generation ago.

“I can’t think of anyone we’ve rented to recently who didn’t make $100,000,” said Bruce McNeilage, who owns 148 rental homes around the Southeast and is building 118 more.

As more people forgo Homeownership, there is a risk that America’s already-wide wealth gap gets worse. Home-price appreciation has historically been the way most middle-class Americans accumulated wealth. When real-estate values rose steadily in the decades after World War II, middle-class wealth surged, according to a new analysis of consumer survey data from the University of Michigan going back to the late 1940s.

“Houses are the democratic assets, roughly half of housing wealth is owned by the middle class,” said Moritz Schularick, a professor of economics at the University of Bonn and one of the authors.

It isn’t unusual for high-earners to rent in pricey coastal cities like New York and San Francisco, where sky-high real-estate prices have long limited homeownership. Yet these markets account for less than 20% of the new six-figure renters, according to the Journal’s analysis. 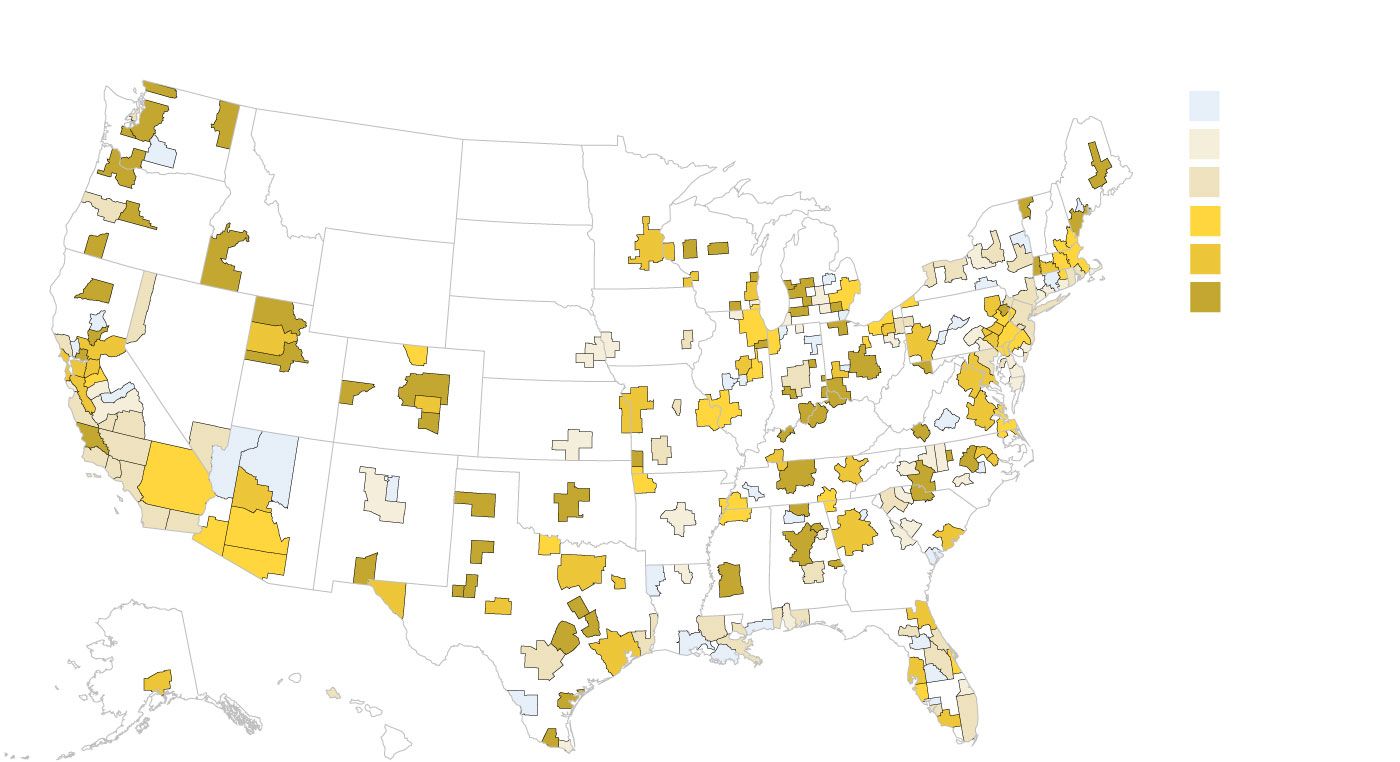 Percentage change since 2006 in renting households earning at least $100,000, by metro area

To accommodate well-off renters, developers have raced to erect luxury apartment buildings around city centers. Investors, meanwhile, have bought hundreds of thousands of suburban houses to turn into rentals and are increasingly building single-family homes specifically aimed at well-heeled tenants.

The average tenant of the country’s two largest single-family landlords, Invitation Homes Inc. and American Homes 4 Rent, now earns $100,000 a year, the companies say. These companies own some 133,000 houses between them in attractive neighborhoods with good school districts around growing cities, like Houston, Denver and Nashville, Tenn.

In each of those cities as well as in Seattle, Cincinnati and Ann Arbor, Mich., the number of six-figure renters doubled or better between 2006 and 2017, making them the fastest-growing segment of renters in these markets, according to the Journal’s analysis.

During that period, which began just before the housing market imploded in 2007, the number of renter households in the U.S. grew 25% while the number of homeowners was nearly flat, according to the U.S. Census Bureau. Since 2017 home buyers have started returning to the market, but not nearly enough of them to offset the decade of new renters.

The big home-rental companies are betting that high earners will continue renting. Bankrolled by major property investors like Blackstone Group Inc., Starwood Capital Group and Colony Capital Inc., these companies snapped up foreclosed houses with the expectation of renting them to educated workers who could afford to pay a lot every month but perhaps not buy.

Six-figure earners tend to be more consistent rent payers, too. Car troubles or a sick child don’t cost them hours at work and income like they can for many lower earners.

High earners also tend to stay put and are willing to absorb regular rent increases if it means not having to move their children to new schools. That translates to lower turnover and maintenance costs for the landlords. “These tenants are treating our houses as if they are their homes,” American Homes CEO David Singelyn said at a real-estate investment conference this summer in New York.

Invitation and American Homes have reported record occupancy and rent growth as well as ever-growing retention as their average renters’ income has risen into six-figure territory.

The phenomenon is being felt down the line in the rental-home business and has prompted a rush among investors to buy and build family-sized rental houses around growing cities. Investors, a mix of big and small landlords and house flippers, accounted for more than 11% of U.S. home sales in 2018, their highest share on record, according to CoreLogic Inc.

A $100,000 income is still comfortably in excess of the median U.S. household income, which was $63,179 in 2018, according to the Census Bureau. But many Americans these days are mired in debt. They have car payments, credit-card debt, health-care bills and college loans. Student debt is particularly vexing for the younger Americans who are starting families.

There is a connection between student loans and the housing bust, which isn’t lost on young home buyers. Many students took out loans because the housing crisis wiped out the equity in their parents’ homes that would have helped pay for college. Since then the amount of student debt outstanding has tripled, to more than $1.6 trillion. A couple of years ago Fannie Mae, the government-sponsored mortgage giant, made it easier for borrowers with higher debt levels to qualify for a mortgage, though recently Fannie tightened its lending standards.

Despite the concession, and low unemployment, the homeownership rate remains stuck about a percentage point below its long-term average of 65% and well below the peak of 69% reached during the last housing bubble. In the second quarter, there were 78.5 million owner-occupied housing units compared with 43.9 million that were rented, according to the Census Bureau.

Those who do want to buy a home face the additional hurdle of high prices that have surged beyond the reach of even relatively high earners in cities with strong jobs growth. Prices in 75 of the country’s 100 largest metro areas have surpassed their precrash highs, not adjusting for inflation, according to mortgage data and analysis firm HSH. Many of those cities, such as Salt Lake City and Raleigh, N.C., also have some of the fastest growth in high-paying jobs. The sharpest recovery, according to HSH, has been in Denver, where home prices have doubled since 2012 amid an influx of California tech workers and New York finance firms. Prices are nearly twice their precrash high.

Would you ever feel at home in a rental? Join the discussion below.

“The lack of savings for a down payment in this country is grossly underestimated,” said John Pawlowski, a housing analyst at Green Street Advisors, who estimates that the typical renter’s net worth is about $5,500. “Consumer balance sheets are not good.”

In Stapleton, where Ms. White lives, the typical household income is more than $135,000. Tom Cummings, whose company manages some 240 rental homes in the neighborhood, said his typical tenant is a two-income family with children, drawn by the neighborhood’s top-rated schools. Some are recent transplants unsure if they’re staying long-term. Others can’t afford to buy, he said. 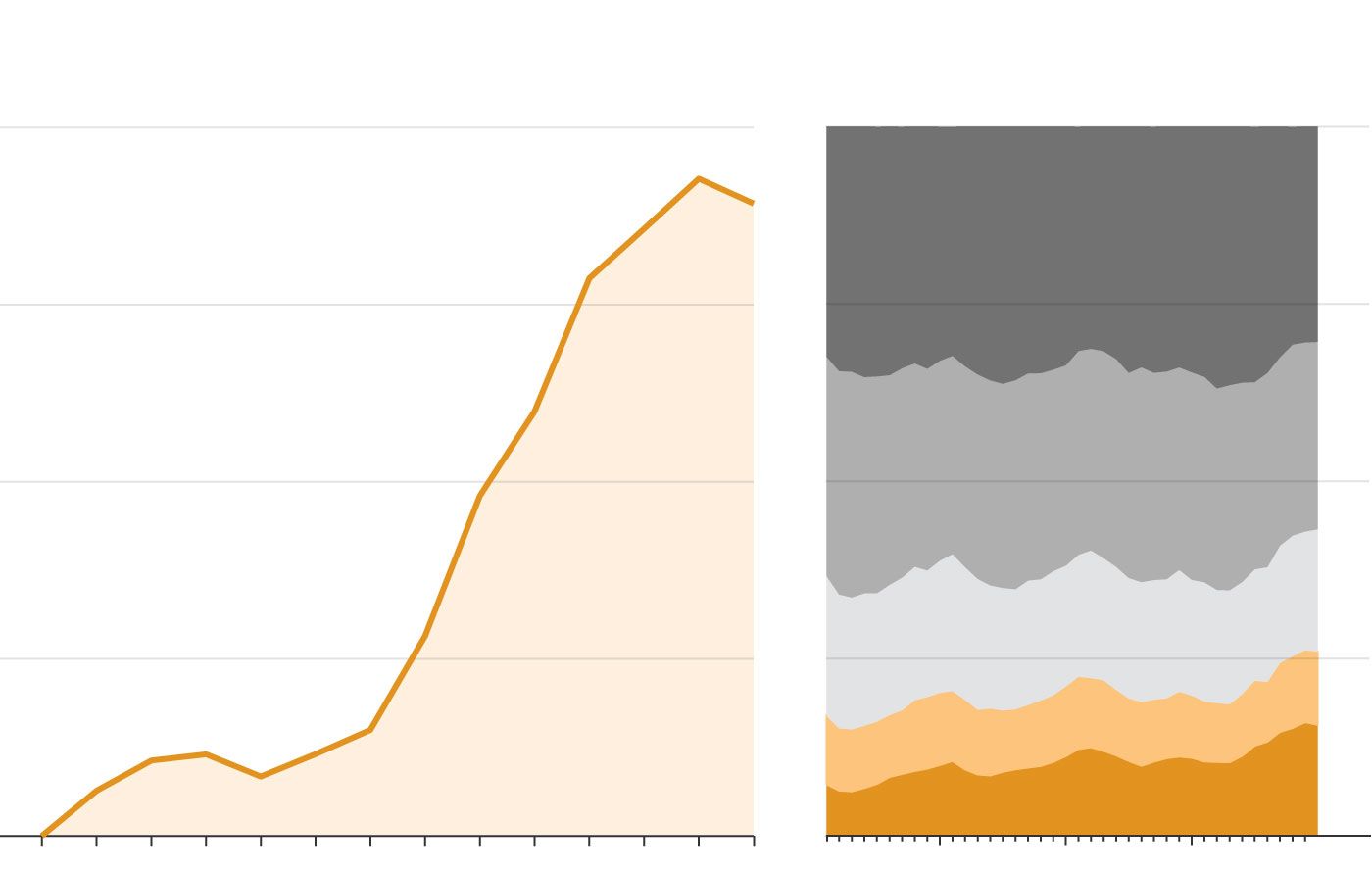 Portion of renting households since 1980, by income group

Percentage change since 2006 of renting households earning at least $100,000

Note: Based on inflation-adjusted household incomes

Houses can be effective wealth builders because most people borrow most of the purchase price. That leverage magnifies gains when prices are rising, but also increases losses when they fall. That explains the big decline in household wealth in the financial crisis and why people are less excited about owning a home today despite otherwise steady appreciation over the decades.

Invitation’s Mr. Tanner likens attitudes toward rental homes to those of leased autos. “Twenty years ago people thought about leasing a car and it was like a bad word. Everyone wanted to own a car,” the 39-year-old CEO said. “Today nobody cares.”

In fact, the idea that homes can lose significant value means people may treat them more like cars, which lose value every year. According to a survey by mortgage finance company Freddie Mac, just 24% of renters said it was “extremely likely” that they would ever own a home, down 11 percentage points from four years ago.

Jacob Neuberger, a 30-year-old who works in Denver for an investment firm, considered buying when he moved out of his one-bedroom downtown apartment. He and his girlfriend opted to rent a townhouse for $2,700 a month. The one next door sold for $550,000. Mr. Neuberger estimated that his costs to own would be about 20% higher than renting and that he would need the townhouse to appreciate by about 10% to cover transaction costs if he needed to sell to buy a bigger home or if he had to move for work. “The price appreciation can’t go on forever,” he said.

Madeline Smith, an executive assistant for a local real-estate investor, and her boyfriend, who works in real-estate development, nearly bought a house in Denver two years ago. They had made a quick decision to offer about $25,000 above the asking price under pressure of a bidding deadline. At the inspection, they started adding up the expenses for repairs and upkeep.

“The yard was beautiful, ” Ms. Smith, 29, said. “But who takes care of it? Do we have to come home and take care of it or hire someone? That’s more money.”

The couple backed out and she instead traveled abroad for a few months. When she returned, they rented a luxury apartment downtown and are waiting for asking prices to come down.

Investors are betting many of today’s luxury apartment dwellers will soon be looking for high-end suburban rental homes. Many single-family investors have determined that high-earning renters are willing to pay up to be the first occupants of a rental, which has sparked a boom in built-to-rent homes.

In the second quarter, American Homes 4 Rent added 136 custom-built homes while only purchasing eight existing houses, the first period in which the company built more than it bought. The Agoura Hills, Calif. company estimates that it will spend as much as $900 million this year and next adding properties to its stable, mostly building them with high earners in mind.

Executives say they’ll be building around Denver, where its $2,195 average rent is the highest in its portfolio by more than $300 a month, as well as in other booming Western cities like Seattle, Salt Lake City and San Antonio.

Just off San Antonio’s main freeway and across the street from one of its top high schools, the newly built Pradera community features tidy houses big enough for a family, typical of many subdivisions. But they are available only to rent.

For Lakisha Caldwell, the community offers suburban living that is mortgage-free and maintenance-light. “We don’t have to cut our own grass. We don’t have to worry about changing the lightbulb,” she said.

Pradera, where the typical tenant earns above $100,000 a year, will eventually include 250 rental homes. It is one of several single-family-rental communities developed by AHV Communities LLC and Bristol Group.

Mark Wolf, CEO of Irvine, Calif.-based AHV, said he looks for plots of land near good schools, employment centers and transportation corridors where well-off families might be able to afford to rent but not yet buy.

Ms. Caldwell, who is 32 years old and works for a medical-device company, and her husband have been renting since moving to San Antonio eight years ago. They have a 10-year old son, two rescue dogs and two foster children.

“Some people make me feel bad about renting. They say, ‘Oh my goodness, you spend all this money on renting,’” she said. She has no desire to become a homeowner at the moment. “I don’t want to do what the Joneses are doing.”